03 A Walk Down Infrastructure Lane - My Home Lab Setup

As the tittle suggests It’s time to go down infrastructure lane. In this blog post I’ll show my “home” lab and all the services I’ve built so far.

I will do my best to keep this up to date so check this post regularly for updates, both to the content and the image at the end.

If you are interested in just the network topology, you can find it here

Without further due let’s get started.

So the physical topology is rather simple. It can be best explained by this photo: 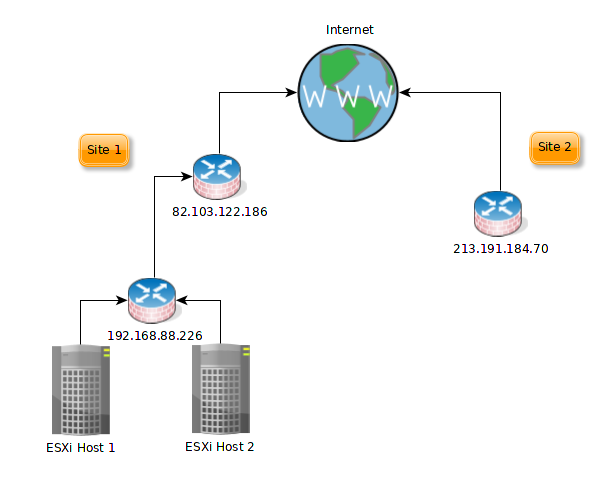 Site 1 is where my main infrastructure is located. The catch there is that the public-facing router is not mine and I cannot manage it. My control comes at the second router - the one at 192.168.88.226. I only have configured the public-facing router to port forward port 1194 to my router and thus have my vpn run through (more on that later). Site 1 consists of 2 ESXi hosts connected with a simple linksys router (the one at 192.168.88.226 on the image).

Site 2 consists of just the router at home but you’ll see later why it’s important.

Now the fun part - the logical layout. Instead of describing all the virtual machines that I have, I reckon it would be more useful to explain what you’ll hit and what you can access once you’re on the network.

Accessing the network can be done only via VPN - this can be done at vpn.samitor.com on port 1194/udp. Once you connect you’ll find yourself connected to an Ubuntu server vm running the vpn server only.

I used to run the vpn service in docker but I recently changed that since you cannot log container’s iptables connections and I need the monitoring feature.

Depending on the VPN certificate that you have, you’ll join a different subnet that will give you the correct permissions to access resources on the network. The IP that you’ll get is not NAT-ed so I can filter and track the outbound connections based on client IP at the nearest firewall which happens to be the pfSense appliance at 10.0.30.1. This is what we know so far: 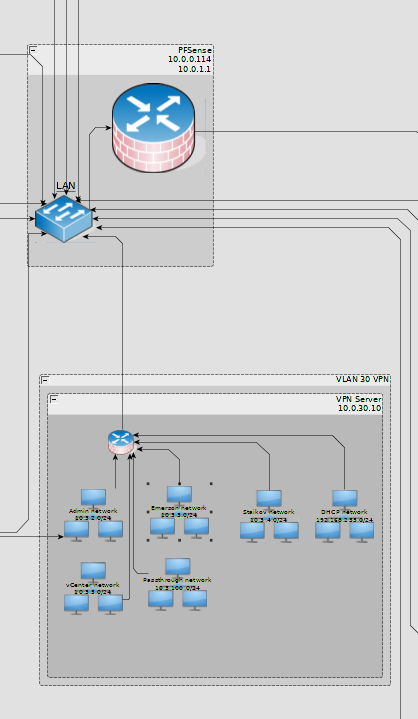 Ths VPN vm is the only host in VLAN30 so it is, in a sense, isolated from everything else. All connections coming from it are considered as untrusted.

The pfSense appliance is dropping all connections apart from the ones in the whitelist that I’ve build: 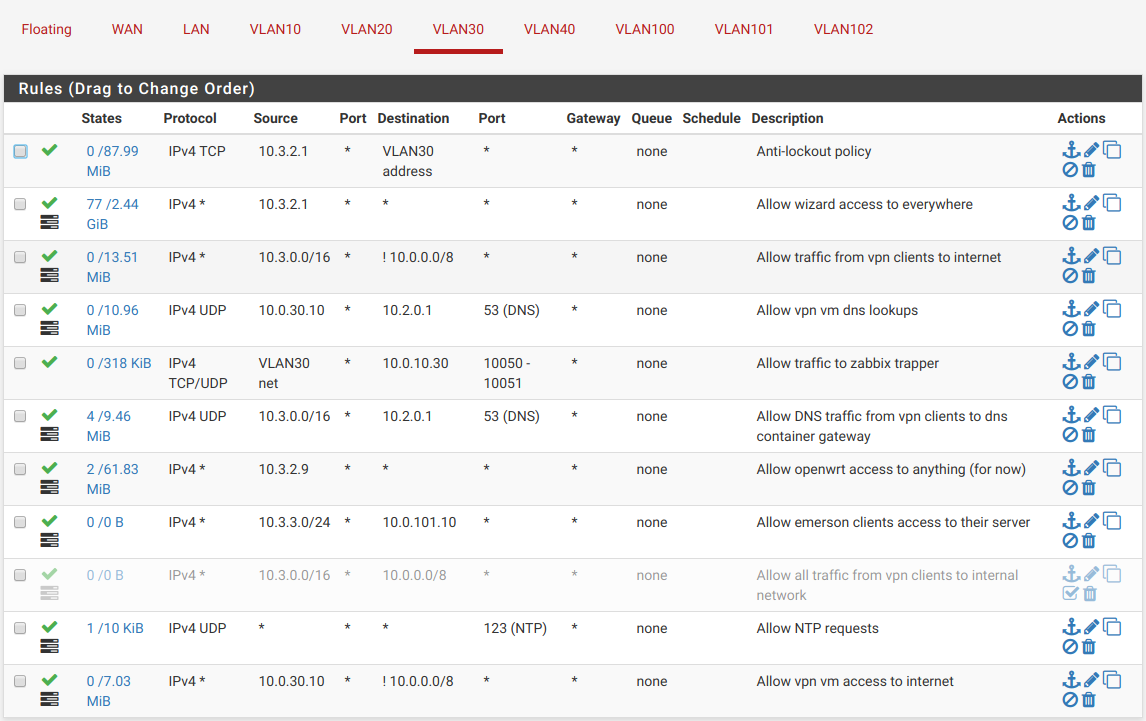 So in simple words what the above configurations shows is:

If any of the clients on my vpn want access to anything on the internal network it will be explicitly allowed and added as a whitelist rule in here (look the rule that allows clients on 10.3.3.0/24 access to 10.0.101.10 host).

Machines in the 10.0.40.0/24 network are in VLAN 40 which is marked as unsafe and nothing in this VLAN is allowed access to the internal network (apart from DNS requests and zabbix info):

I have a couple of not important machines in there. So our knowledge for the network expands to: 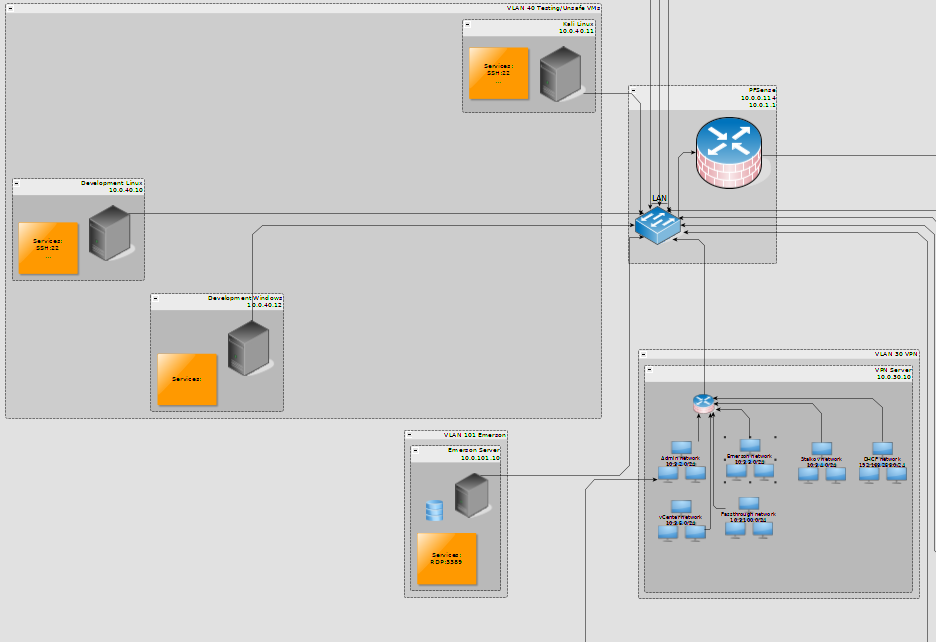 The next important vlan is VLAN 20. I’ve marked it as Important/Management VMs.

The following hosts are present in this VLAN:

The Container Host changes the most frequently and it currently runs the following containers:

There used to be an owncloud service but I’ve removed that since it wasn’t used.

Here is a nice cli summary:

I have a dedicated vm for ELK - this is the Ubuntu server at 10.0.20.13. It currently collects the logs from the pfSense appliance, the Container host and the VPN Server vm. Here is how that looks like:

The Mail server is where my mailing service runs.

It is a Roundcube installation with postfix running as mail transfer agent and Dovecot as a IMAP and POP3 server. I don’t use the Roundcube web ui to access my mail - I use KDE’s powerful kmail client.

ProTip: After couple of reinstalls I figured out that the installation can be automated with iredmail

I’ve done Active Directory management, played around with Group Policies, powershell and what not.

I set it up right after I found out that VMWare’s vSAN feature is not free.

Openfiler is some sort of a virtual NAS that is FOSS. The NAS capabilities include CIFS, NFS and HTTP. It can also be used as an iSCSI device if need be. It provides some failover and High Availability features which is always nice. The best part is the it can be managed via a web interface. Despite being a bit sluggish for me (might be because of insufficient resources) it behaves quite well. Here is a screenshot of the home screen:

So this concludes VLAN 20 walkthrough 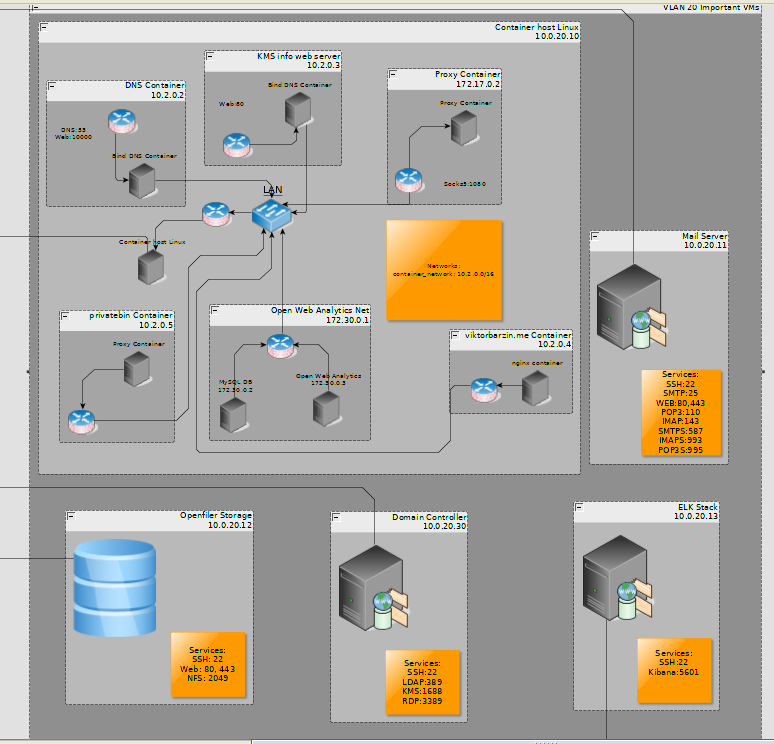 Last but not least is VLAN 10 which is the infrastructure manager vlan.

This is where my vCenter Server Appliance lives.

It is also where my Zabbix Server resides. I’m using zabbix for host monitoring and real time alerting if something goes wrong. Here is what zabbix looks like:

Access to these 2 machines is strictly filtered since breaking into the vCenter could allow an attacker to change anything in the infrastructure.

The zabbix instance also has privileges to access anything on the network therefore it lives in the most protected and limited VLAN in the network.

Now in the beginning I said I have 2 sites - one that hosts my ESXi hosts and another one which I labeled home. What has home to do with my main infrastructure site?

Well the catch is that at my main site I do not own and manage the public IP address. The only open port I have is 1194 and this is quite insufficient for my needs.

So how do I run a mail server, multiple websites and what not with only 1 open port?

Remember the router at home? It is running OpenWrt which is a sort of distro for routers. Maybe busybox on steroids is more accurate.

Anyway, it has a VPN certificate that connects straight into the main site. I’ve forwarded ports on my router at home to services in the vpn network linking the 2 networks.

This is how the public side of my network looks like: 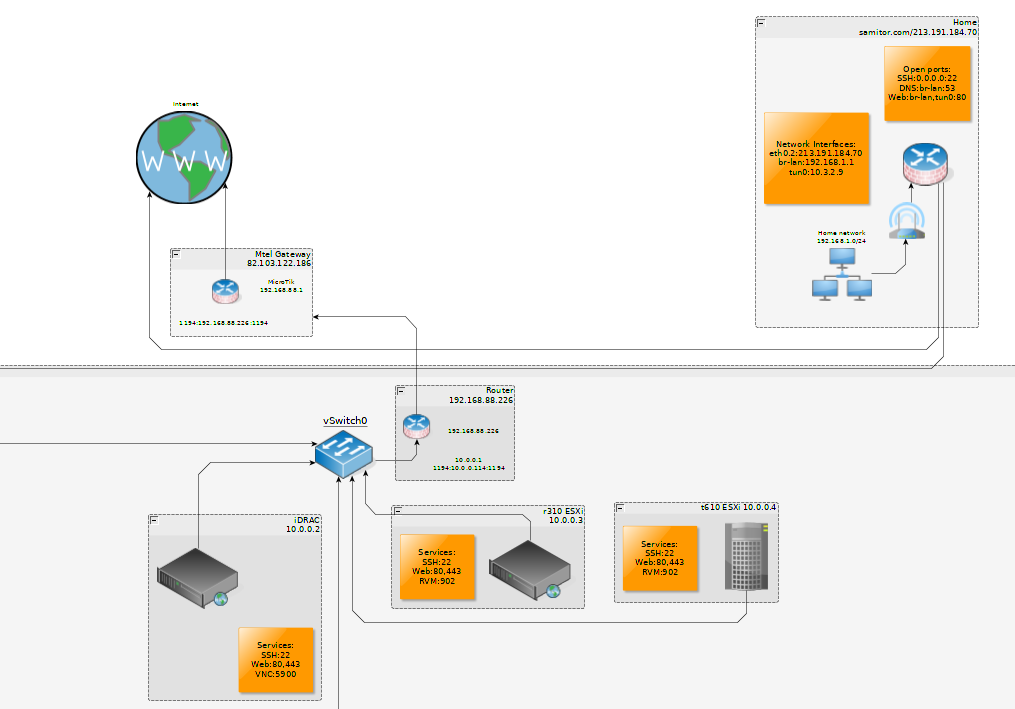 So each time you are visiting this site, or sending me mail at viktorbarzin@samitor.com you are going through the router at home which is routing traffic via the vpn eventually reaching its target service.

I’ve also bridged the wifi network at home to route the 10.0.0.0/8 network via the vpn interface so when I’m at home I don’t need to connect to the vpn.

Now that all seems pretty and nice, however, there is a small caveat. I showed you the logical part of the things, but I didn’t show you exactly how that translates to the physical topology.

I have 2 ESXi hosts controlled by a vCenter appliance.

If you have a single host, you can virtualize everything and do whatever you want and lie the vms as much as you want about the physical topology beneath. However, once you have to step outside in the real world, things change dramatically. The main issue is that each of the hosts has its own TCP/IP networking stack therefore routing and iterface subnets need to be configured again for the second host as well and more importantly, each of the hosts needs to know where everything else is.

I hoped that vCenter will manage this in some “magical” way but alas it wasn’t the case. I wanted eventually to move a VM between hosts without worrying about networking.

I looked into Distirbuted switches, Private VLANs and what not. Unfortunately neither did the job for me and eventually I had to setup a copy instance of the PfSense on the second host.

I was really reluctant to do that since changing any configs in one of the instances, I had to replicate them in the second one so that everything is consistent. But oh well, there it is

Now if I want to move a VM to the other host I also need to change the according routes to it.

Firstly, I have to add the routing information in the first pfSense instance. Here is what I currently route:

For some reason, when matching any of these, it sends it first to the gateway at 10.0.0.1 which then has to make the same routing decision. This is how it looks on my linksys router:

It also routes the other way around - VMs on my second host that need to access VMs on my first hosts also need to know where to find them - this is done both at the linksys level as well as at the second pfSense instance.

I’ve made identical vSwitches on both of my ESXi hosts, so moving a VM is rather easy… just add the appropriate routings and it all works.

I hope this gives a general idea of what my lab setup looks like. I’ve spent an year or so to build it. In the near future I’d like to setup more monitoring via ELK beats and also setup a Kubernetes cluster.

You can see the full network topology here

NOTE: this image will be updated from time to time.