I do happen to travel from time to time and in order to stay online I have to use insecure public wifi. Everyone who understands a bit about network security knows the risks of connecting to unsafe networks and how dangerous they could be.

One of the most common solutions to this problem, including mine, is a VPN service. That’s all great, however, more and more network administrators put effort into blocking VPN traffic.

That annoys the heck out of me so in this post I’ll show you how I’ve essentially bypassed any VPN filtering with some simple tweaks.

Now before reading this blogpost, I recommend getting yourself familiar with basic OpenVPN as well as systemd concepts.

My setup consists of a OpenVPN instance so whenever I say “vpn” I refer to OpenVPN entity.

How is OpenVPN traffic filtered?

Having a quick look at the network traffic, we can easily spot the OpenVPN traffic: 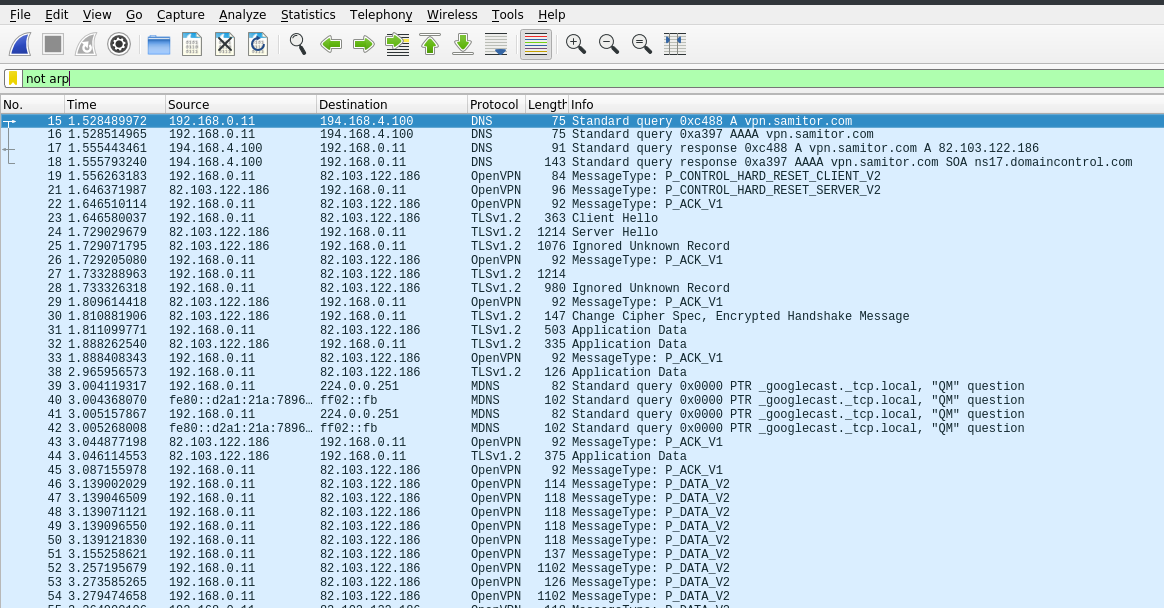 The image shows the beginning of the communication - firstly the DNS query, followed by the OpenVPN TLS handshake and finishing with the first packets of encrypted data sent over the secure channel.

By default, OpenVPN runs on port 1194/UDP so filtering it can be as simple as

Nowadays, network admins would probably use a more GUI-like user interface to do that, but that’s essentially what it boils down to.

Port 1194 is what Wireshark recognises as OpenVPN traffic as well:

What can we do about it?

Whenever you connect to a secure website (including my blog) you are essentially sending HTTP requests over an encrypted channel that is set up beforehand. The SSL/TLS protocols (see difference between SSL and TLS) lie at the heart of web security these days and there are plenty of other protocols that rely on SSL/TLS to securely transfer data around. Once this channel is initialized, the outside world cannot see any data that travels inside it.

OpenVPN also uses TLS for its encrypted channel. The TLS handshake is standardized and does not depend in any way on the protocol it carries.

So could we run the OpenVPN service on port 443/tcp to mask is as regular HTTPS traffic? Absolutely! Blocking 443/TCP would mean breaking the internet for the common user so no one will ever do it.

A funny thing is that in all the forums I read, everyone' opinion was that you can run multiple instances of OpenVPN simultaneously, but no one gave any guidelines on how exactly to do that. From the scarce information that I found, 2 things became clear to me:

I really didn’t want to go the bridging way so I kept on looking for an alternative. What’s more I didn’t want to spin up an entirely separate instance - it was a must to reuse my config files and client certificates.

I looked for a more Linux-y way of solving this issue so I had a think - OpenVPN is just a daemon ran by systemd. By default it has the following config:

I had a second look at the directory where the service file lives (/lib/systemd/system/) and I noticed there are several openvpn related service files:

That “@” looks dodgy, let’s see what it stands for in the unit file name.

The answer lies in section 5 of the systemd manpage (man 5 systemd.service)

Woah! systemd can pass arguments to the daemon executables it runs, how awesome is that!

Having a look at the openvpn-server@.service file we can see that it’s more complicated that the first one:

I’m interested in the ExecStart directive as this is what is being executed as a ‘service’. Obviously, this is the OpenVPN daemon being started and I’m keen on learning what this ‘%i’ stands for since the config I want it to use is referenced as ‘%i.conf’ (at the end of line 15)

Having a look at man 5 systemd.unit shows a neat table that explains is well:

Aha! So I could start a openvpn-server@some_name.service and that would start an OpenVPN instance using some_name.conf as a config file.

By default, there is no server directory in /etc/openvpn so after we make that we should get our hands on creating the new tcp config file:

We want to have the same config, to make use of the same client certificates and what not, but run on port 443/tcp. So the config has to be mostly the same with only a few changes :

Let me explain why each of the changes is needed:

The rest of the config is the same. So let’s start the second instance and keep our fingers crossed:

That seemed to have done the trick since the vpn instance was up and running.

Then I quickly crafted a client certificate that would be an exact copy of an existing one, with the exception of the port and the ip address.

Now if you’ve read my post about my home network topology, you know that the only port I have on my disposal on the site where I’m hosting my vpn server is 1194.

However, I’d like to run another instance of OpenVPN that listens on another port. So I’ve hit a wall there …

OpenWRT to the rescue

Running OpenVPN over tcp hurts performance significantly due to the way of how tcp works. I’m setting up this instance not to be fast, but to be stealthy so I am ready to sacrifice a little bit of performance. Now given that I desperately need hole through which I can smuggle my service and that performance is not a priority, perhaps I could make it run via my home router as I’ve done previously with this site. 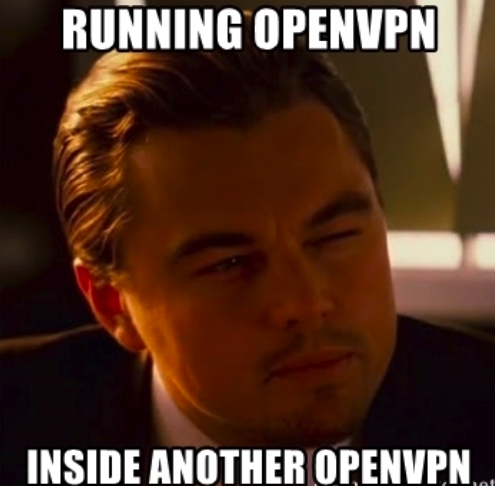 The meat of this hack

Let’s step back and see what that means. Hopefully this picture clarifies things a bit: 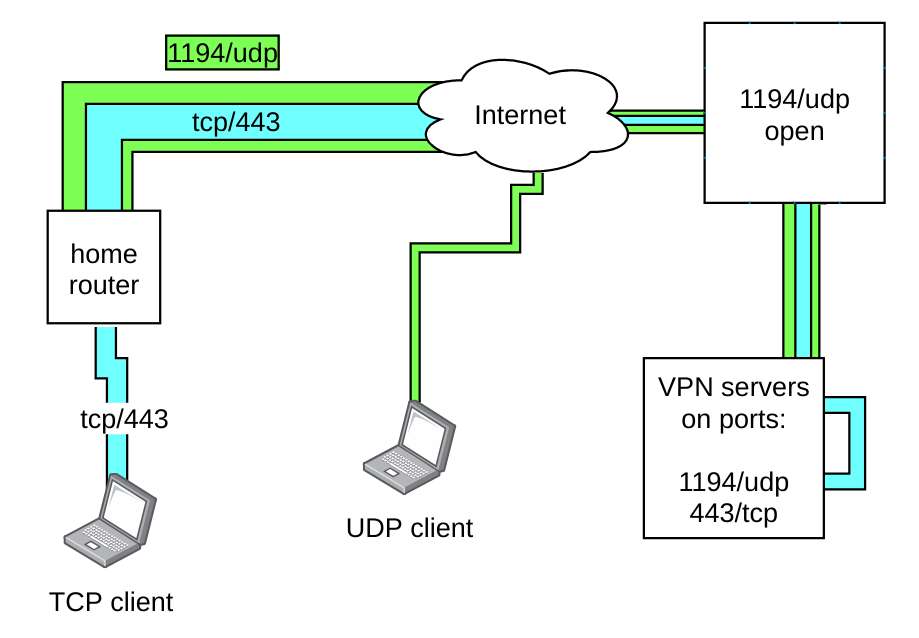 Firstly, UDP clients are not affected in any way. My home router is one and I use its udp vpn connection to send tcp vpn traffic from the client on the left. When that nested conenction reaches the server, the udp one is stripped away and then the tcp connection afterwards so in the traffic logs on the server you could tell both clients appart even though one carries the traffic of the other.

Let’s see if this even works:

So we should be done by now right?

There is neither ping on any of the machines on the internal network, nor access to public addresses.

Is it the firewall or the routing?

So the OpenVPNpn client log indicates that a connection with the vpn server on the other side has been made successfully, but there is no internet access. Now there are a few probable reasons for that:

Putting the debugging hat on

The good news is that I don’t have to debug the OpenVPN thingy but instead a networking issue. Firing up tcpdump everywhere yeilded an odd result - the ping is being received by the vpn vm, however, nothing is sent back.

So it’s probably iptables that’s stopping my traffic isn’t it? Let’s stop it for a moment:

Nope, still no ping back.

Then, surely, it must be an issue with the routing table. The weird thing about the whole thing was that I could cleary see the echo requests on tcpdump, but could not see any echo replies - if it was a routing error I would see the echo replies going out from a wrong interface, but I couldn’t see any!

This took a good couple of days to figure out.

I found this nice blog post from 2014 that explained how to do the entire thing - run a tcp and an udp instances of OpenVPN with the same config and without using a tap interface.

I had done most of the stuff the guy explained, I’ve just missed the last part - the routing. There is this simple script that I’d missed. It takes care of the routing whenever a client connects and disconnects. Basically, each time a client (dis)connects a static /32 route is being added /removed that would tell the kernel to route the client via the according interface - if the client connected via tcp aka tun1 - then route him via that interface. Otherwise route the client via the default tun0 interface:

We want this script to be executed each time a client (dis)connects.

There is a special directive in the OpenVPN server config for that (have to put it in both configs):

PS: Remember to add your vpn daemon user to sudoers and allow him to execute /sbin/ip as root - it needs to be able to change system routes:

Finally it should be good to go!

This time I decided to have a look at the server logs - something must have gone wrong server-side!

From this log snippet I could tell that the daemon has started listening successfully (line 4), client has connected without any problems either (line 6) but then when running the learn-address script there is this “Operation not permitted” on multiple instances.

You could cleary see that root is executing the /sbin/ip command (so /etc/sudoers is read properly) but then why does it still get permission denied?

Debugging this issue was a hard one.

Eventually I found the answer in a debian bug report logs on openvpn.

The issue was in the .service file of the openvpn tcp instance. The CapabilityBoundingSet directive controls what capabilities the started process will run with.

Apparently the default set does not include the capability for changing routes (or some other, I haven’t figure it out).

The easiest way to fix it is just to comment out that line:

Obviously the best way to fix it, is to find out what capability it is missing and add it to the list. In my case it’s not mission critical given that I run my default OpenVPN with default capabilities, I don’t see that as an issue for the tcp instance.

After restarting the services I finally got it working properly:

.. with the appropriate route being set for tcp:

There’s a problem that I haven’t solved yet - proxying the tcp vpn instance on port 443 at my home router raises an issue. The router at home runs a haproxy instance on 443/tcp (read more here) to forward traffic to my webserver and serve content over HTTPS. I can’t really tell which TLS traffic is for the website and which for the vpn - that was the point in the first place wasn’t it.

Currently as I see it, I’ll probably need another public IP but we shall see. Or since I have the private key for the TLS certificate I might be able to make haproxy act as a router but I need to do more research on the topic.

Running a second OpenVPN instance on the same machine seemed as a pretty easy task, however, there are some caveats that might get in your way. I learnt a lot about systemd, how it operates and what awesome stuff one could do with it. Moreover, it was fun debugging the networking issues after a client has connected and last but not least I’ve never had to debug capabilities issues so that’s good experience as well.

Getting everything to work brought me great satisfaction and a feeling of a time productively spent.

OpenVPN over TCP or UDP - pros and cons

GitHub issue hinting that multiple OpenVPN instances are possible, but not without further tinkering

Digitalocean guide on systemd and how to manage services in linux