In my previous post I shared most of the services I am running at home. In this post I will share the way they are setup, including code sources, some of the challenges I met and how I solved them.

Design a system that is:

The system must allow for easy disaster recovery with minimal downtime and recovery effort, ideally with no data loss.

The physical constraints are:

Let’s build ourselves a self-hosted cloud!

Having 1 physical machine almost certainly means that some sort of virtualization would be required.

Xen sounds like a great solution - it’s FOSS and linux based.

Unfortunately I have not spend enough time exploring it and initially I had gone with a different provider so you can call it “legacy” reasons of me not picking Xen.

Microsoft’s HyperV is a great solution for Windows-based environments. Some of the things I don’t like:

VMWare’s vSphere is a great well-rounded solution for virtualization, coupled with a comprehensive UI. There is no Windows bias and it is quite easy to get started as opposed to KVM-based solutions.

There are also educational enterprise licenses which have no expiration date (thanks VMWare!) so quite easy to learn and explore without having to pay thousands in licenses so long as what you are doing is non-commercial.

And the virtualization choice is:

There’s lots of tutorials on how to install ESXi and it’s not that exciting so skipping it here.

Installing web servers and application software on bare VMs is quite an old-fashioned and would definitely be not satisfy our high availability and low operational cost requirements.

Containers prove to be a great solution and are the natural evolution of VMs. With the cloud era it would be madness to choose anything else but Kubernetes for container orchestration.

We have a hypervisor that’s ready to run VMs. We know that we will be using Kubernetes to run all services.

It’s time to come up with a network design.

Network management is hard so let’s try to keep it as simple as possible.

Following these requirements, a simple solution like the following diagram seems to work well: 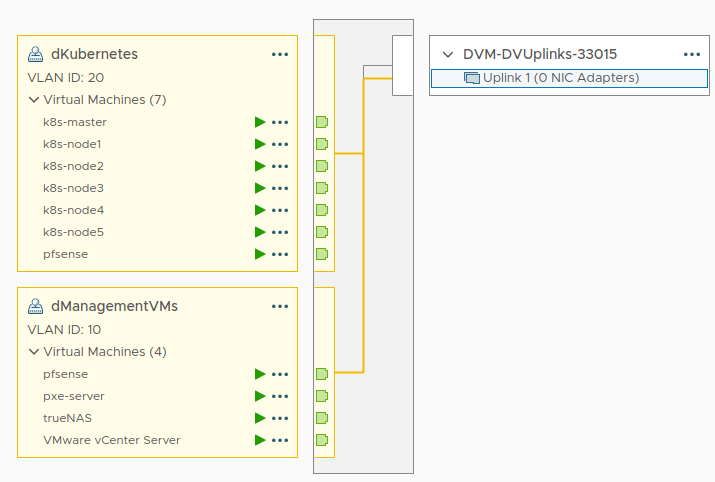 Here is how a newly created VM would boot off the network and auto install itself:

Currently my PXE server is still using ansible so I don’t yet have a terraform module for it. The important bits are the pxe config file which creates the boot menu for the client:

and the ks.cfg kickstart file which allows automatic install:

It takes around 10 minutes on my hardware to go from empty VM to a installed, ready-to-use one.

Quite happy with TrueNAS so far.

If we assume all of the above is the “hardware” part of the infrastructure, let’s see what challenges are there facing the software part.

We have a bunch of services running inside a Kubernetes cluster but how would traffic reach the cluster in the first place?

Let’s have a look at the network diagram at a more software-y view point:

Network from a software point of view

A question that is raised - where would all traffic be mapped to? In any Cloud Provider service (GCP, AWS, Azure) you will get an IP address automatically for each service. Well, since we are talking about self-hosted cloud we do not have the luxury of someone setting up our IP addresses for us.

So, let’s look at what options we have:

Option 1: we can forward all traffic to a master or worker node which would then use kubeproxy to forward traffic accordingly

Problem: What happens if this node goes down? Service may be available but will not be reachable so this option is not great

Option 2: we can forward the traffic to a virtual IP

Each node would constantly communicate to each other to elect a “leader” which will allow him to “hold” the virtual IP and communicate that with the upstream route via either gratuitous ARP or via BGP. If the “master” node stops responding to pings from other nodes, they elect a new master and update the upstream router.

metallb is a network load balancer which can do just that!

Here is a simple metallb config that uses ARP to manage an address pool:

Great, we can have virtual IPs mapped to dynamically-assigned physical hosts which eliminates the single point of failure on the node level.

Now comes the question how to have a single IP address for all services - if we go with the 1-ip-per-service approach it would be a nightmare to remember which IP address belongs to which service.

The ingress controller takes 1 “external” IP address from the network load balancer and then does layer 7 routing decisions.

For instance, routing http traffic is done based on the Host header. Here is a simple config for an ingress resource:

This resource instructs the ingress controller to forward all requests with www.viktorbarzin.me Host header to the blog service. The service itself is using the default and simplest ClusterIP type which exposes it only to intra-cluster traffic.

Furthermore, by passing the tls parameter along with a secret name, the ingress controller can do TLS termination which is quite neat!

Okay, http resources can share a single IP address quite easily thanks to the Host header. What about other, non-http services such as IMAP?

Well, we could create another service with ClusterIP type with a different IP address and map a port from there. But then we would have 1 IP address for http-based services and a separate one for other services.

Here is an example service that shares the same IP address of the service of the ingress controller but uses different port:

The rest of my infra leverages this foundation which makes deployment of new services quite easy.

Checkout my infra repo - https://github.com/ViktorBarzin/infra - where you can find the terraform modules for the entire thing.

Let’s see how with this setup we meet our goals in the problem statement:

Design a system that is:

Adding new services is as easy as deploying them in a new kubernetes namespace. Kubernetes deployment configs are widespread and there is almost no software for which you cannot find or create a kubernetes config.

Currently, all my resources are defined using Terraform resources. Terraform HCL != Kubernetes deployment configs so deploying new services does not automatically make them part of the infrastructure-as-code.

There are tools that translate Kubernetes yamls to terraform resources but further exploration is needed.

Scalable (can handle increase in usage)

This site barely gets 50 visits per day and that’s in a good day. The most vanilla nginx installation would easily handle this amount of traffic but if it we were to increase the traffic by 10x, scaling would be a matter of increasing the replica count.

All of the stateless services can scale horizontally without issues but the stateful ones are a bit trickier. Scaling the mail server deployment, or the privatebin instance which use some form of storage would not be as easy.

Sharding would probably be best but I do not find this area as interesting so I’ll probably not invest too much time in it in the near future.

Measuring high availability is tricky, especially when there is no traffic and when there are external factors such as ISP outages involved.

From https://status.viktorbarzin.me you can see that the service availability is in the mid to high 90 percentages. Downtime is caused by 2 reasons: 1) ISP outage (which includes power outages) and more commonly 2) Me tinkering with the setup and bringing a service down with faulty configs.

From design point of view, Kubernetes manages available replicas and the setup with the virtual IP address removes node failure as a cause for downtime.

There are some caveats though which are a consequence to the constraints we are working with - namely there are still single points of failure which are inevitable so out best uptime would be at most equal to the uptime of those nodes:

1 is a bit tricky to solve due to the power outages. Let’s look at the power supply in the network:

Despite having a UPS battery for the all of the devices I manage, the building level switch does not have any power redundancy and hence when the power goes out, so does internet connectivity to my infrastructure.

Another single point of failure is the PfSense VM which is the entry point to all VMs. If that goes down services in all VMs would be unreachable. Could be solved either by exposing all VMs to the upper network (don’t like that) or by having an additional PFSense VM clone which would be in stand by (VMWare HA).

3 is a compromise after long fights with CephFS which proved to cause more problems than it solved for me :/ I will investigate other options such as glusterfs or revisit ceph because having a distributed storage is a much more reliable and scalable solution than having it centralized in a single place.

4 is not solvable as long as there is 1 physical server. Adding an additional server is out of scope for my infra as the electricity bill would double and the benefits would be theoretical. Anyway I do not make any profit whatsoever from this infra so increasing the cost would be unreasonable.

With the current setup of Kubernetes and Terraform, infra is quite easy to maintain and update - I have Drone pipelines for rolling out new images, for periodically rebuilding the Terraform state - so operational cost is quite low.

It would be nice to have the ability to deploy random dockererized project - currently it has to be “converted” to a terraform resource list which is a implementation specific detail of my infra - it would be better to take as input either Dockerfiles or Kubernetes specs.

I have not invested too much in security as everything is build with security in mind. Areas to explore are adding further logging and traffic monitoring - an IDS/IPS would be nice to have within the cluster network.

Kubernetes seems to be doing a good job of managing the lifecycle of applications and making sure that enough replicas are alive at any given point. Since most of the infra is build in software, hardware reliability is less of a concern.

There are some glitches happening from time to time causing stuck pods and dead pods appearing as alive. Increasing the number of alerts would help detect and mitigate such issues going forward.

Congrats on reaching the end of this long article, hope you’ve enjoyed reading and learned a few things from my experience.

and it took me nearly a year to get it from scratch to its current state.

Of course, there are a lot of services which did not make it this far, such as CephFS and GlusterFS although I did spend significant amount of time setting them up.

Do checkout my infra repo at https://github.com/ViktorBarzin/infra. I’d be happy if you find this blog post and the repo useful. Do let me know in the comments and see you next time!